This week I’m talking about gender, being non-binary and gender stereotyping in a series of Pause For Thoughts for Laura James’ Early Show on BBC Radio Devon. There will be 7 in total, so stay tuned and remember – nothing’s binary.

It’s been a couple of years since I’ve been dressing almost exclusively “as male” (but not trying to “pass” as male).  You know what I’ve discovered? Men’s clothes are boring.

Isn’t it weird that clothes are so gendered? Trousers, no longer. A woman wearing trousers is not “cross dressing”, but apparently, a man wearing a skirt is??? 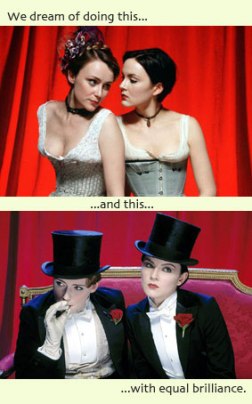 and need I add “everything in-between”?

For those of us who are gender fluid, transgender or who simply don’t want to be defined by stereotypical gender boundaries, clothing and image are effective tools in sending a message about who we are, since they are both visible and instantly communicative.

I’ve two friends especially struggling with this right now, who will go unnamed. One has a female body and the other a male body. My female bodied friend identifies as non-gender-binary, but looks extremely feminine. She rings me up in frustration at trying to express her masculinity through image, whilst being blessed with curves and delicate features.

My friend in a male body is firmly cis-gendered, but thinks women have all the fun in terms of nice clothes. He is very worried about what male friends or potential female partners would think if they saw him dressed in the clothes he really likes, which are stereotypically worn by women. Is he a transvestite? I wouldn’t say so.

In the words of designer and gender-superhero Arian Bloodwood, I would say more that my male bodied friend simply wants to wear clothes that he likes.

My two friends and I all want the same thing – to be perceived as ourselves. Since, in one way or another, we don’t fit within conventional gender boundaries, it’s difficult to work out how to “present” as who we really are.

When my male friend walks out the door in his favourite outfit, some people will see a guy who just looks fabulous and knows how to dress. However he also fears attracting negative attention if perceived as a gay or transvestite by people who view those groups negatively. Essentially, when he dresses as himself, he worries about being seen as someone else entirely.

My NGB trans friend in a female body doesn’t like being seen as a very feminine woman, whilst the masculine part of her goes unnoticed, since she struggles to send the “right” signals through her mode of dress.

But what ARE the right signals? We’re in a strange intermediate phase as a society, where gender boundaries have started breaking down, but they haven’t snapped completely. Dressing as male has helped people to better understand my gender, yes that’s true. But, would I need the label of non-gender-binary transgender if society’s ideas about gender were blown wide open? If that happened each person would meet me as me, without applying a set of parameters to my personality based on the gender of my body? Would I need to “dress as male” then? Probably not.

I’ve thought a lot about the signals I send out through image and my decision in a couple of years ago to only wear “what I would wear if I had a male body”. Out went strappy tops, bras, anything that showed midriff or accentuated breast size, and in came tailored shirts, waistcoats and… no that’s all really. Told you men’s clothes were boring. And the truth is, if I really did have a male body, I’d wear dresses skirts and other “female” clothes here and there, because they just look fabulous are great fun!

Male and female bodies and brains are different in some ways, yes. But ultimately, I believe we need to throw out our expectations of what people should be like/should do/should be treated based on the gender of their bodies (or clothes). Only then, will both transgender and cis-gendered people alike be free to express and be accepted as who they are fully. In some parts of the world this is a mortally serious point*.

We can contribute to moving this issue forward by opening up to it on a personal level. Support the cause by cross dressing this Christmas, but don’t call it “cross-dressing”, just call it wearing clothes that you like.

* Each year Amnesty International run the Write For Rights campaign, which is a wonderful thing. Cases are varied and it’s worth noting that each year there are some cases relating to gender/sexuality. Click here to participate in the campaign.