After a 1 year gap in posting…I’m back!

What will Symphony For Happiness in 2019 look like? Up until now, I’ve written about experimenting to find alternatives ways of doing things that make sense to me, hoping that if they make sense to you too, reading this could give you an idea for change, or simply help you feel like you’re not the only one. I’ve written about running out of money on purpose, in my £0 Challenge, travelling only by fixed gear bike during my One Gear Year, living as a Digital Nomad Skype Tutor in a VW T4 van, Minimalism and anti-consumerism, and many other experiences that I consider part of my Symphony For Happiness.

Everything I’ve done in my own life has been because I’m interested in challenging all ideas that we take for granted whether their good for us or not, because if they are not good for us then we need to find a different way of doing things. This year, that ethos has led me very naturally into climate campaigning and Extinction Rebellion (XR), as well as being more visible as a gender and LGBTQ+ activist. I’ve also become Bard, and now Grand Bard of Exeter, in which I have taken an oath to the land and the people of the city, and this devotion has made me even more dedicated to the sustainable future of the planet. As well as personal growth, change and empowerment, I’m going to be writing about more of the above this year.

So, here’s a bit of a summary of the story so far, in pictures and videos:

Here I am performing on the Pink Boat at Oxford Circus, during this years April action for Climate justice, by Extinction Rebellion. Photo by Tony Pletts. See me perform, here: https://www.facebook.com/kimweidotcom/videos/1086225831562887/

My 7 spoken pieces, filmed by Exeter University Television Channel which consider what a sustainable future could be like:

My 7 spoken pieces, explaining climate change through the eyes of a Climate Scientist I lived with from 2013-16 filmed by Exeter University Television Channel:

“Nothing’s Binary”, my gender and identity themed album, which also features some world change songs, was self-released Dec 2018. I have also appeared on queer discussion panels and given workshops at various festivals including Come As You Are and Exeter Pride, as well as Summerhouse and Togetherness. 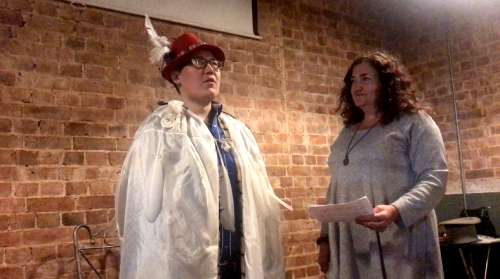 Being sworn in as Grand Bard of Exeter (2019-2025). An extract from my speech:
And so we are in the age of the Bards,
Because all we have is the sum of our commitments.
We do not have what we own,
We have what we commit to.
We do not have what we buy
We have what we commit to take care of.
As Bard I have taken an oath to the land and the people of the city, but regardless of who becomes the new Bard tonight we all can go to our own homes and make a commitment to the land below us and the people around us. If we do that, we can all have the Earth, to restore, to nourish and to care for.

So watch this space for more, as I am back and posting!

Shh… don't let them know I've got NO drive to succeed

When it comes to aims in life, we have to start from where we are and build up brick by brick. I have been pondering on the truth of this with regards to music recently.

I have observed that there is a current trend for a major label to back and artist for 2 albums. If the first is successful they will fund a second, but by the time a 3rd is required, a record label can get a much better buzz by funding a new band. The artist can be at best, left to their own devices with the benefit of 2 tours under their belt, or at worst deliberately buried by the record label.

In this industry there is a strange pressure to succeed very quickly, and build up what would be considered a ridiculous curve of profit in a very short space of time, compared to any other business model. Record labels love to pick up 18 year olds and make them international success stories, so there’s a pressure for unsigned/independent artists to compete, and make it nationally/internationally by the age of 25 at least.  They also love to pick people with no history in the industry and turn them into national heros within a few months (X Factor etc).

In reality, for an independent artist, a comfortable curve of development to reach that level of success from ground zero in a stable way is a minimum of 10 years. And it’s becoming my increasing belief that if it were to take even longer, for example, 20 or 50 years, far from calling that a failure, it may be an even more pleasant journey.

In fact, this capitalist concept of success is ultimately damaging. The act of being a musician is just this: Make music. Make music make music…. and the rest will come as a product. A person who loves making music will make music every day for all the days of their lives, and eventually, by cause an effect this will cut out how their life will go. They may be asked to play for others, or teach others, or share music in some other ways. And naturally, since they gravitate towards these suggestions they will accept opportunities as they come. But ultimately, if they are genuinely a musician then they will feel fulfilled when they are making music every day, and this will flow easily. I truly believe that there are ways of doing this without having to struggle, or feel pressure to succeed.

To everyone out there who is struggling for money as a professional musician, here are a couple of ideas that I like.

-If I already make music every day, then I it can’t get any better than this.

I am 26. I have recorded and independently released 4 albums and am currently recording a 5th. I play live locally and on short tours up to london. I teach individual guitar lessons, classes at a Music College, and run workshops and Master Classes for groups. I also run a recording studio from home in which I’ve produced 2 Eps, 3 Albums and several Singles besides my own recordings. I gravitate towards performance environments in which my music can flourish. I have no career plans.