Van Living Offline: If It’s Not On Instagram, Did It Really Happen?

Usually I’m the odd hippy in the corporate world, working as a university lecturer on Skype, living in a van/house-sitting. Now that summers on, I enter into being the odd Digital Nomad in the world of offline-van-dwellers and travellers. Alternative lifestyle blogs are unusual because people are usually either doing it, or writing about it, not both. As I know from my yurt days, it’s hard to get online when you’re off-grid.

A quick visit to any festival van field shows me a different world. Whilst my colleagues are often shocked to discover that my Vansion neither has a water tap nor fridge, rock-n-roll bed, nor toilet, this setup comes as standard for van-dwellers who self-build. Why would you want to replicate a house in a van? Fridges need power. Water tanks are a hassle compared to bottles. Fold out beds are for holiday makers, and lastly, when you live a in 65sqft box don’t poo in it!

What’s inspiring to me about chatting to the folks who live almost totally offline, is learning about the wide range of lifestyles available. It’s so easy to think that you need to be online to make a living. What’s rule one of starting your own business? Answer: get it on social media of course! That’s what we’re used to thinking anyway. Even during my £0 Challenge of 2014, I survived largely by making sure I stayed online. Yet there are alternatives.

As musicians go, they all outstrip me; of course they do. Full time buskers are hot as hell on their instruments because they play for hours per day. They don’t have space in their packs/vans for tons of sheet music, but they don’t need it because they are constantly learning new tunes from each other. I only have to sit with a van-dwelling busker for 5mins and they’ll teach me a song so we can play together. With that and seasonal work, they get by more than fine.

As travellers go, I met some super-tramps who can sleep anywhere without a tent, hitch-hike anywhere and get there before you, build their own benders at the drop of a willow, and skip-dive like their in Mission Impossible. I thought I was experiencing a collision of worlds when I realised how much more extreme that collision must sometimes be for offline hitch-hikers:

Me: Thanks for the great meal Jake. Lovely to have loads of veg after a few days travel where it’s hard to get it.

Jane: Yeah me too.

This reminds me of the folk I met who were hitch-hiking and ended up stranded at a motorway service station for so long they set up camp in the woodland just off the carpark. 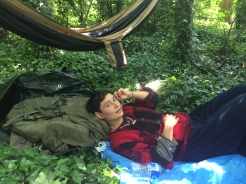 Jane, incidentally, who can survive in the wilderness for months on end using only stone age tools she has made herself, is soon to be flown to Germany to “perform stone age living” at an immersion project, in the strangest mix of modern and ancient worlds I have ever heard of. She also told me a secret: “I’ve got a smartphone now.”

There is a myth that the offline world doesn’t really exist. If you can’t google it, or there isn’t a photo on Facebook to prove it, did it really happen?

My income is online; I straddle two quite disparate worlds… and I like that (“I love my hybrid nature – no binary can contain me!” – Meredith Tea ). But it’s refreshing to see people making their way in the world through offline networks, or at least a real mix between the two. The online world isn’t as dominant and powerful as all that: whole worlds still function under its radar.
Over the past few years, I’ve given up so many things I thought I needed, and have felt freer each time. Being immersed in the offline world, even for a short time, inspires me to ask “What more I could free myself from?”… I’ll let you know when I have the answer.